While salespeople and traders in banks' markets divsisions progress up the hierarchy at a pace reflecting their performance, junior investment bankers are typically promoted in lockstep. - One rung at a time, at the end of the year, as they slowly progress from being analysts, to associates to vice presidents (VPs). Traditionally, it took six years or more to progress beyond the junior analyst and associate stages.

If you've been paying careful attention, however, you will know that this is no longer the case. One by one, various banks have shortened their analyst programs and begun promoting to associate up to a year earlier. Citi and UBS were some of the first to do so. Goldman Sachs followed in 2015/2015. Morgan Stanley belatedly followed in August last year. By promoting analysts sooner than was traditionally the case, banks hope to retain them and to dissuade them from running away to work for private equity firms, which have been recruiting more voraciously than ever.

Junior bankers have good reason to want promotions quickly. As vice presidents, they get more responsibility, more exposure to clients, and more pay. As a VP in London, your combined salary and bonus will be anything from £247k ($305k) in the first year, to £338k ($418k) a few years later. Being a VP unlocks the higher levels of compensation.

After years of tweaking their promotion cycles, however, not all banks promote to VP at the same speed. Investment banking recruitment firm Arkesden Partners, says some banks regularly promote people to VP a full year before others. - Usually because they have chopped a year off either their analyst or the associate programs.

If you work for Bank of America, Barclays or UBS, Arkesden says you can be fairly assured of getting promoted to VP five and a half years after first joining as an analyst. Every other bank takes six and a half years, says Arkesden.

Banks don't comment on their promotion cycles. However, it's worth noting that some European banks have different job titles - at UBS, associates are now as associate directors and VPs are known as directors, for example.

The chart below from Arkesden shows the difference in promotion cycles by bank. The shortest analyst programs are at Goldman Sachs, Morgan Stanley, Bank of America and Deutsche Bank. However, these are typically offset by longer associate programs.

Some banks have resisted the temptation to shorten training programs. At Rothschild & Co., for example, the analyst programme is 2.75 years and the associate programme is three years. "Our philosophy is that we prefer for people to have a really sold training base and to set them up for success throughout their careers," says HR director Ali Trauttmansdorff .

Length of analyst and associate programs by bank: 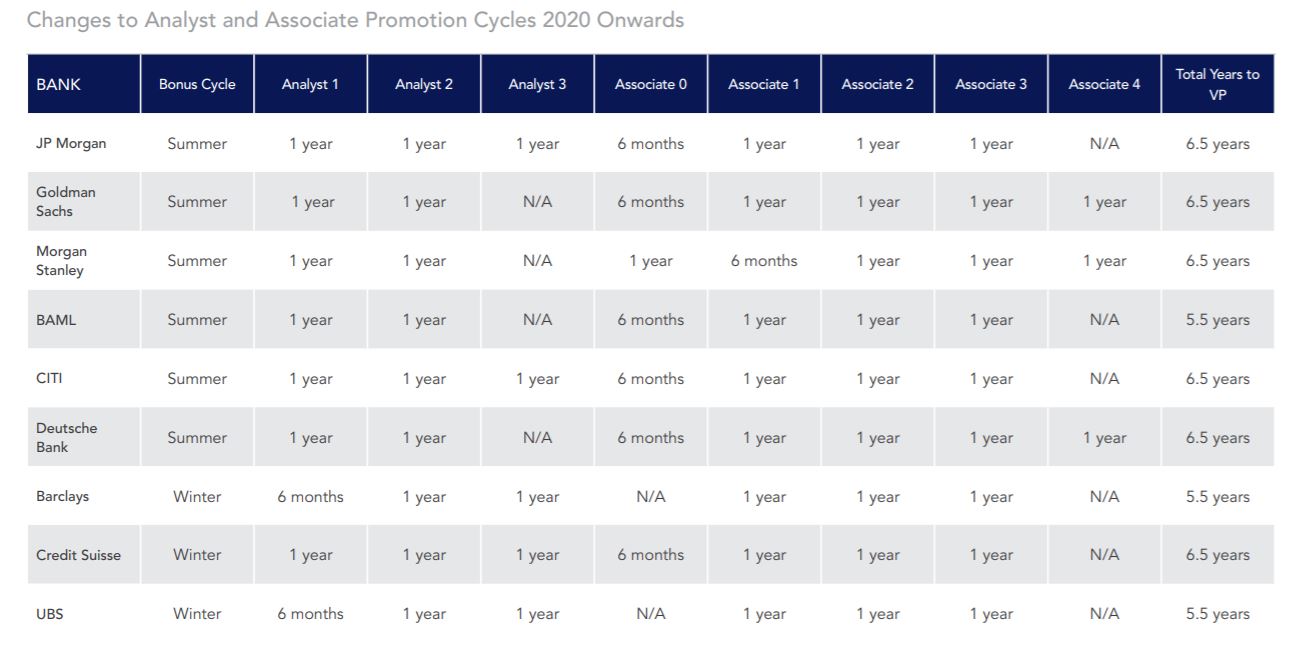